of the PACCARD Bell Foundry

Creation of the Foundry

The PACCARD Foundry was created in 1796.

It is nowadays one of the flagship of the French industry, maintaining an ancestral know-how which has been passed on from one generation to the next since 1796 (involving 7 generations by now), thus illustrating in a magnificent way a successful marriage between tradition and modernity.

Created by Antoine Paccard in 1796, the PACCARD Bell Foundry has been existing for more than 200 centuries. At that time, in a village named Quintal (Haute-Savoy / French Alps), people asked their bishop for a priest to be appointed in their parish; Bishop answered, literally: “you’ll have a priest when there will be a bell in the church tower”. Therefore a founder master was contacted. His name was Jean-Baptiste Pitton; he lived in Carouge, next to Geneva in Switzerland.

In those times, bells were still cast directly on site and Mr. Pitton said he needed an apprentice. Village municipality members gathered and appointed Antoine Paccard, who founded the house and created the PACCARD Foundry after his apprenticeship training. When he died, his sons Jean-Pierre and Claude Paccard took over the Foundry business. This new industry was expanding a lot, and Georges decided that factory had to be transferred from Quintal to Annecy-le-Vieux, (Haute Savoy / French Alps). Transfer took place between 1854 and 1857.

Thanks to Jean-Pierre’s sons Georges, Francisque and Victor, the Foundry became very successful and was known worldwide by the end of the XIXth century. Georges was taking care of the technical aspects management and supervised the casting of more than 10000 bells. Beauty of the PACCARD bells shape, accuracy of their musical tonality, magnitude of their fascinating sound and harmony…all this is the result of Georges’ hard work. Carillons were very fashionable in Belgium and tended to expand all over occidental countries; Georges Paccard was their main promoter in France.

In 1891 he had the “Savoyarde”casted for the Sacred Heart Basilica at Montmartre in Paris. It was – and still is – the biggest bell in France. Georges worked with his sons Joseph and Louis, giving them precious advices.

After World War I, a great number of bells were made at the foundry, some of them being pretty famous, like for instance the “Joan of Arc” bourdon bell of the Rouen Cathedral (Normandy / France).

At that time between 700 and 800 bells were cast every year and sent all over the world. Thanks to Alfred Paccard (Louis’ son) and his cousins Henri and Jacques, Foundry kept on expanding. Henri more particulary specialized in bells tuning and developed a very specific technique thanks to which the PACCARD Foundry became the carillon specialist worldwide. As a matter of fact its reputation comes partly from the molding process used and above all, from the mastering of the musicality of bell involving timbre and music note. This is one of the reasons why 54 replicas of the well known “Liberty Bell” were ordered in 1950 by the US government.

Since then numerous peals of bells were made and sent to the US. At the time when Alfred Paccard’s son, Pierre Paccard, ran the Foundry, record levels were reached. The biggest peal of bells in the world was achieved in 1986 and sent to Canada: 3 bells of 6, 10 and 19 tons.

Since 1989 Foundry is located in Sevrier (Annecy lake shore, Haute Savoy, French Alps, France) and since that date numerous peal of bells and chimes were created, such as the carillon of Chambery (Savoy, French Alps, France), which is the biggest one in Europe. New workshops had to be built in order to face an increasing demand. In 1998 we proudly cast the biggest ringing bell in the world, a 33 tons bell ordered for the third millennium by a billionaire living in the US !

Creation of the company

In 1796, Antoine Paccard cast the first PACCARD bell. He is then unaware of the fact that his name would echoe around the world, as a synonym of musical excellency.

The Savoyarde, the biggest bell in France

The Savoyarde bell was the present offered by the Savoy region to France when the country was consecrated to the Sacred Heart of Jesus further to a national vow. It was installed in the church tower of the Montmartre Sacred Heart basilica in Paris in 1905. It weighs 18835 kgs and is still nowadays the biggest bell in France.

The Joan of Arc bourdon bell in Rouen

This bell was cast in 1914. Weight: 16 tons. It was the second biggest bell in France until it was destroyed in June 1944 as a consequence of a big fire having devastated the cathedral Our Lady in Rouen (Normandy, France). A smaller “Joan of Arc” bell weighing 10 tons was achieved at the PACCARD Bell Foundry in 1959.

The Liberty Bell is one of the most well-known bell in the world. It rang on July 4th 1776 in Philadelphia, the day when independence was declared in the USA. In 1950, Federal American government orders 49 replicas to the PACCARD Bell Foundry, that is, one for each state capital. This order was, and still is, a reference definitely contributing to the PACCARD Bell Foundry strong reputation in North America.

The biggest swinging peal in the world

Stephen (19 tons), Ann (10 tons), and Daniel (6 tons): Those 3 Bells make a wonderful peal of bells installed in the Transfiguration Basilica at Markham (Canada); it was a great human adventure as well.

The Grand Carillon of Chambery, the biggest carillon in Europe

Restoration of the old carillon of Chambery – originally made for the 1937 universal exhibition – was the occasion for the foundry workers to excel by achieving the biggest carillon in Europe (70 bells) : a leading reference and a prime example…

33 tons ! No need to say more… The World Peace Bell could be heard striking the 12 strokes of midnight on December 31st 1999.

The All Is Well Bell

Paul Kos is an internationally recognized artist who had been a conceptual art precursor in the sixties. He was chosen by the San Francisco Artistic Committee to produce an artwork (as a mark*) to be placed in the brand new San Francisco City Public Security building. For this, Paul Kos chose the PACCARD Foundry and ordered the casting of a 10 tons bourdon bell. Made on Oct. 23rd 2012, it was installed during the year 2013. Since then, the “All Is Well” bell has been ringing every single day at noon to let people know that “all is going well”.

This major work of the century took place in 2015. After it was restored, the new carillon of cathedral Our Lady in Rouen was the heaviest one in France and one of the hugest in Europe : 64 bells – five and a half octaves – and five swinging bells : Joan of Arch, main great Bourdon Bell (9,5 tons), Roman, smaller Bourdon Bell (5,2 tons), Germain (4,7 tons), Agnes (2,3 tons) and Cecil ( 3 tons). You might be able to watch a very nice broadcast referring to it, named “Les Filles de Bronze”.

A new world record to come…

At the PACCARD Foundry we are working on a – still secret and confidential – worldwide record. We cannot tell much about it right now. All we can say is that it will be the biggest Ars Sonora® sculpture in the world.

Today the manager of the Foundry is Pierre Paccard’s son, Philippe Paccard, assisted by his brother Cyril. Every year 70 to 80% of the tremendous number of bells cast at the Foundry are sent worldwide.

Since the very first bell made for the church located in the village of Quintal (French Alps, Savoy county), more than 120000 bells as a total were made at the PACCARD Bell Foundry, and most of them were sent all over the world: New York, Tokyo, Montreal, Lourdes, Douai, Dallas, Washington, Berkeley…to name but a few of their destination.

Accessories like clappers, bellfries, lightning rods, yokes are made or conceived at the Foundry where all the electronic or electrical components related to time, ringings and ringtones are created and assembled as well.

The Foundry is now looking forward to new challenges… 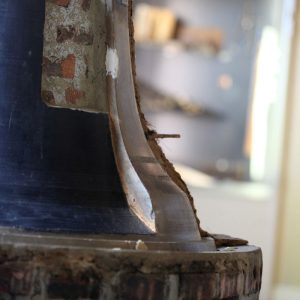 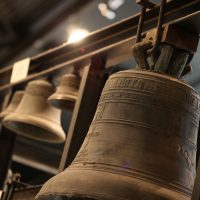